Running on the edge 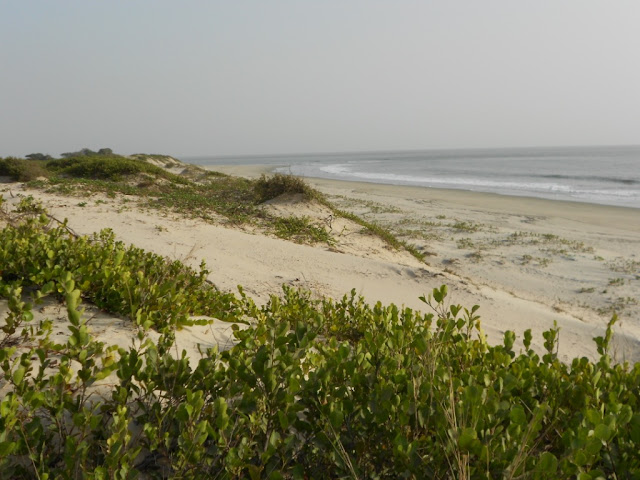 While I tried to describe my run along the corniche in Dakar earlier, my runs this week feel even more difficult to capture.  I’m accustomed to the perfect morning temperatures of Senegal in February- 60’s at dawn rising quickly to 70’s.  The sun is warm, too, but not as searing as later in the day.  Running in shorts and t-shirt feels perfect nearly every day, so much so that I don’t really notice it anymore. There’s no gauging the temperature and layering appropriately as Minnesota requires.

But running on the beach constantly amazes.  Unlike the chaotic images of Dakar, the essential simplicity of the boundary between ocean and land defies description.  The strip of hard, dark sand between waves and the row of shells extends to the horizon.  It’s a clear, straight path.  Yet once I leave Senegal crossing into Guinea Bisseau, a border with no sign beyond the apparent end of habitation, I’m suddenly absolutely alone.  Low sand dunes roll on the shore as waves roll in from the Atlantic.  After reaching a point covered in gulls, the coastline arcs inward creating a shallow bay to the next distant point.  Knowing how every 100 sq meter patch of sand in Spain has a six story apartment building filled with retired Brits, and how Morocco’s and Senegal’s coastlines sprout ostentatious new hotels or villas, this sudden expanse of perfect and perfectly empty beach seems baffling.  In fact, I’ve often wondered when the moment passed, some second Turner thesis, the closing of world beaches to all but the rich, occurred.  Who was the last teacher to buy a house on some ocean coastline?  When did that moment pass forever?  Clearly legal and political differences somehow protect this property. I cynically doubt it’s protected intentionally.  And if I could buy a piece, I couldn’t afford to come and visit it.  Omar, the native Guinean who runs a little resto/bar on the beach (and bears a passing resemblance to Omar in “The Wire”) said Guinea Bissau is known for drug trafficking and makes border crossing difficult.  I guess that might help explain the emptiness

At first, such an empty beach feels almost spooky.  Today I turned to check a shark’s head and noted a white pickup behind me.  Pickups here seem associated with government functions, and I assumed some border patrol and readied my ignorance.  Should I speak in English?  Play just arrived tourist?  I remember I have the phone number of Mamadou’s brother, the mayor of Ziguinchor, in my room with my passport.  But neither will help me if I get picked up by a Guinean border patrol speaking Portugese.  When the truck passes it has Senegalese plates, pulls a boat behind, and soon turns to launch it from the sloping sand.  With vehicles crossing the border unofficially, I relax knowing a runner was below the radar.

And so I continue southward running from one country to another along suddenly empty edge of this large, overwhelming continent.  I hear my daughter’s voice wondering if this will satisfy my wanderlust, recognizing the power of that wandering that brought me to Senegal, that disregarded the warnings about Casemance’s rebellion, and now crosses national boundaries to run on this stunning empty beach.  Clearly, this is the end of my trip, the farthest point from home, the most stunning landscape.  This destination, the one I’ve run to twice and hope to reach twice more in my remaining days, feels like some marker, some extremity, some sign.  The emptiness, the unmarred coastline, the perfect arcs of water meeting sand, the white gulls rising and swirling spiritlike into the sky.  Even the ethereal voice of Bon Iver singing about Wisconsin winter fields seems oddly apt.

But what do I see?  What have I found at this farther point of my trip? What’s beyond the sun’s glare and ocean’s haze?  Ahh, if only, right?  If it were a real sign, what would I find on the perfect beach?  What vision would I faint before?  What stranger would appear from the dunes and what would he say?   Of course, there’s no answer yet.  I’ve read the values of journeys appear after you return, and I hold to that comfort now.  Certainly, I hope the message wasn’t borne by the thin, bronze white haired Frenchman who rounded gull point clad only in tiny bikini and red beret as I was leaving.  One of those retired colonists or children of colonists  (does the make them post-colonists?) who live or retire here in luxury afforded more easily than in Paris.  Is this the message,  my own Francophile fate?  Am I to end up out here on the edge of a continent, and do I have to wear one of those French bikinis (on looking at the picture below taken the next day, the word ‘thong’ seems more apt) even smaller than the ones the Québécois wear in Maine?  I look down at the sand as I round the corner and pick up my pace as I head back. 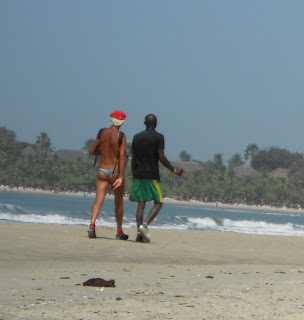