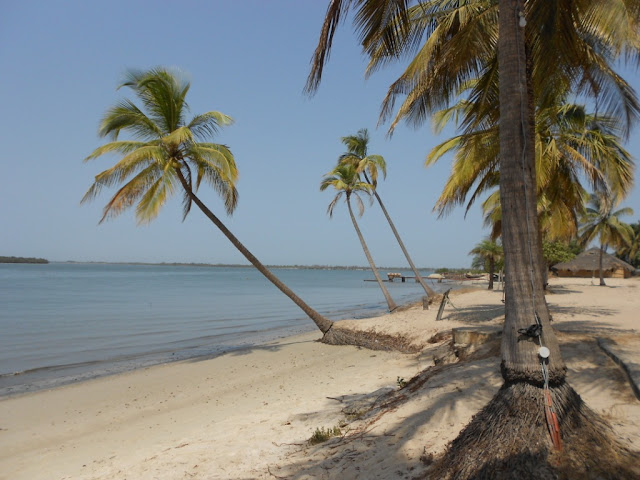 I couldn't help thinking about that damn TV show when I saw these palms leaning over the water.  Really, who's been colonized?  But of course these places are not empty like that island was.  And yesterday I took a pirogue tour around several islands on the inland waterways behind the beaches at Cap Skirring. 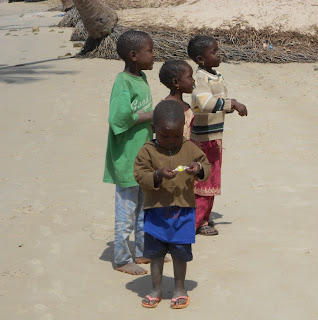 Before that, however, I started my day early, thinking I’d get out for a run on the beach before leaving for the trip.  However, I was too early (no surprise there), up and out before the sun had really started rising at all.  In fact, if I ran south, I really couldn’t see my feet.  Going north, the two lights from Club Med created enough reflection on the damp sand to let me see the ground. So, with coffee an hour away and my running shoes on, I started out in the pitch dark on the damp edge of Africa.  Of course, running blind is plenty disorienting, and although I trusted the flat sand, it also felt particularly odd as I turned south once I’d reached the rocks and headed toward Equitorial Guinea with palm trees slightly silhouetted by the rising sliver moon on my left and the pounding waves on my right. I still don’t quite know where the border was as it was too dark to see any signs.  I turned around when I reached the point and soon had enough light to move more comfortably.  I never quite warmed up however, and I tired soon, no doubt more from strange disorientation than from effort.


After breakfast, I took a day-long pirogue trip among villages and islands in the mangrove swamps and rivers that drain coastal lowlands into the Casamance river.   I went with two French people and two locals as guide and driver, which made for a leisurely day without feeling too touristy.  Like the boundary waters, you move in a Kevlar canoe hand made pirogue from through green landscapes that start to blur after awhile.  I’m assuming mangrove is the only thing that can grow in the salty marshy soil, as there’s absolutely nothing else in the low areas.  Some coastlines or islands rise above the swamp, and the soil there grows the palms, baobabs and the few other plants native to or scratched out of the sand here.

Of course being part of a group of three toubabs with guides doesn’t mean we move unnoticed through these little Diolla villages.  Of course, these aren’t the kinds of places readily visited without pirogue and guide.  I was struck by the fact that having water everywhere doesn’t change the villages.  The salt water isn’t useful for watering, of course, and the soil seemed as sandy and deep here as it is elsewhere.  Still, as the first picture shows, there’s a sort of tropic paradise look to some of these places.  They seemed more open, cleaner, and more organized than villages elsewhere.   One was a Malian village, populated by a Malian family for generations.  According to Mamadou, they have a fetish tree they make sacrifices to, and bury their dead on the mainland as the ground here won’t accept bodies and spits them right back out.  Clearly, the Malians have a bit of a rep here.

On another island we visted an abandoned Breton style church and graveyard from the 1890’s, and a maison des esclaves that served as a transfer station like the one in Goree.  This one was much larger, however, and unrestored.  ‘The door of no return,’ as it’s always called, where slaves were herded onto boats, had the same ominous feel however, despite or perhaps because of the children walking outside of it.

As internet is hard to find here, I don’t expect to post again until I get home on Friday. 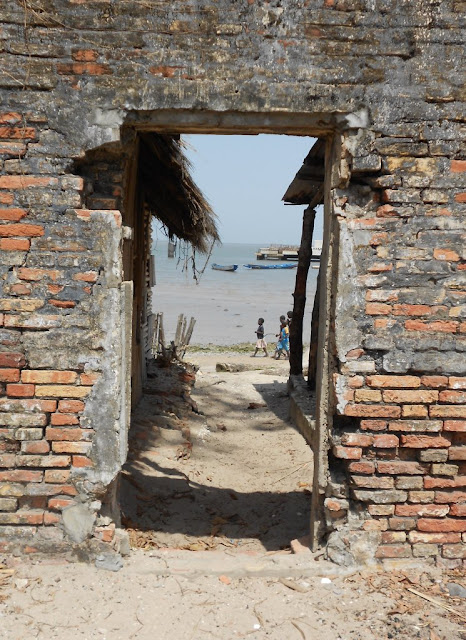