economics i missed in macro 101

Many election posters on walls and glossy commercials during the African Cup soccer tournament seem to chant the word 'development.'  As a political or advertising mantra for growth and progress, it means all things to all people. On the street, however, means improvement in what Senegalese regularly refer to as 'les difficulties' of living here- the grinding poverty of daily life.

Long ago working in restaurants, I quickly realized that the tips earned on $100 meals at Muffaletta were disproportionately greater than the tips made by waiters working the 1:00 AM drunk shift at Perkins.  It seemed sort of like a scam, somehow.  I served better food, worked shorter hours, and made more money.   Later, that general principal seemed to apply equally to careers in the finance and teaching fields, for example.  As there was so much more money moving through finance, simple proximity to the flow earned more money, whereas education always paid poorly regardless of effort. 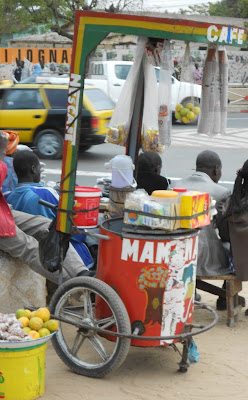 Walking the streets of Dakar, it feels like that same basic principle defines much of the difference between developed and undeveloped world.  As soon as you step outside here, the crush of people working to make a living presses in on you, sometimes unpleasantly.  The young male phone card sellers feel most omnipresent, sometimes five in a block waving plastic sheets of recharge cards in your face, seeking your eyes, hoping you need a refill.  The older female peanut sellers, conversely, work quietly at their tables coating peanuts in melted sugar and spices over charcoal burners and silently offering them in tiny bags for 50cfa.  If you include tiny grocery stores and outdoor markets, 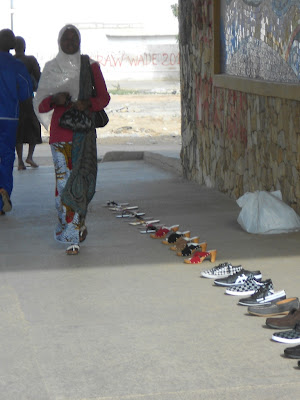 it feels like most economic activity here still happens in the street with improvised shelter, minimal water and no electricity.   Sometimes the sea of hawkers feels like an obstacle course or video game to be negotiated when I try to get somewhere.  Other times, the energy reminds me how it feels to come up out of the Holland Tunnel  and feel the palpable buzz of NYC.

While some street vendors like coffee and snacks seem obvious, others defy logic.  What are the chances that this shoe salesman has both the style and size that a
customer needs?  And why do they all line them up in straight lines instead of grouping them by gender or style?  And why not put them closer to the wall? 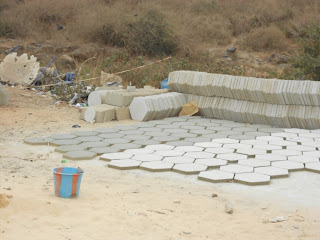 This tile shop on the edge of a roundabout on my running route keeps two men busy making and selling concrete tiles.  Located near the wealthy Les Almadies neighborhood, many gardeners also sell plants and pots here for gardens in the new houses being built nearby. 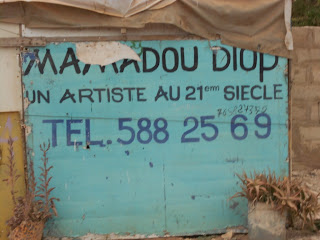 And while this nearby artist makes a large claim for a small hovel,  the 60's counterculture figure Stewart Brand suggests that the energy of  mega cities and smaller ones like Dakar embody more creative solutions than endemic problems.  Despite that hopeful reframing, the difficulty of life on the streets here feels like some sort of monstrous, unfair scam. Of course it's the same one I appreciated when waiting tables and resent when working in schools.  The same basic injustice that fuels the Occupy movement.

Part of being here is about relearning this ancient economic law one more time.  But when I mentioned in class yesterday that would be returning home in two weeks, and a sweet, quiet boy in the back of the class said, "Take me with you," it was just about more than I could bear.