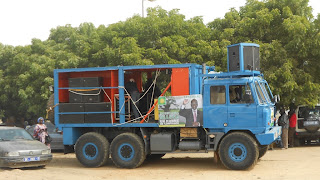 On the day after Rick Santorum’s hat trick in the bible belt, it seems fitting to return Senegalese politics.  While I take great pleasure in the rare Republican inability to anoint a candidate, in their beautiful self-destruction this year, their more classically democratic public squabbling, a similar failure of the Senegalese opposition to unite behind a credible candidate has left some bloggers to conclude that Wade will win reelection, perhaps on the first ballot Feb. 26th.  The campaign has officially started now, although that seems to just mean ramped up.  Large trucks loaded with massive speakers like this one troll the neighborhoods blasting music that if not compelling is at least attention getting.   Although I didn’t catch the show, this parade included 30 or 40 guys on rollerblades who were resting after some kind of performance I just missed. 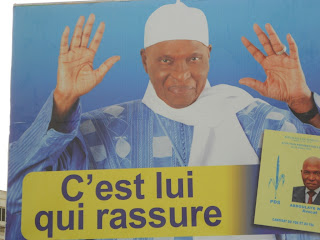 A new crop of billboards have sprung up overnight, and President Wade has a large number of them.  Again, the hand gestures, facial expressions, dress and slogans feel both similar and different from our own stripped down, stylized visual approach to visual candidate branding.  In these billboards, it’s hard not to start w/ the most disturbing one.  Wade’s face, which has a botoxed lack of expression, (at lunch today the WARC staff thought it was photoshopped) stares out with the joker’s rictus-like smile from the first Batman movie.  His hand gesture- is it beneficent?  Is it crying ‘halt’ as if to try and stop himself from running again?  But the Big Brother-like slogan, “He's the one who reassures” feels most creepy.  Senegal’s apparent inability to enforce the constitution, to stop a candidacy that seems eastern European in falseness, to unite behind a candidate or strategy to stop the juggernaut creates a deep sense of fatalism and cynicism in most people rather than reassurance suggested here.  And while Santorum is plenty creepy himself, Visiting the MN sweater vest factory is quite different from sacrificing 87 bulls, giving away 32 radios, and pouring out thousands of bottles of water as proscribed by some kind of spiritual advisor here.  I don’t know whether or not to believe this headline, but my students today assumed it was true. 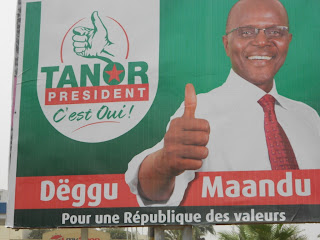 Tanor, the guy who’s arm gestures and expression I liked in the first round of posters has gotten a bit clichéd this round, claiming a return to ‘values’ and giving us all a reassuring thumb’s up.  That’s just more empty positivity than I can really stomach. 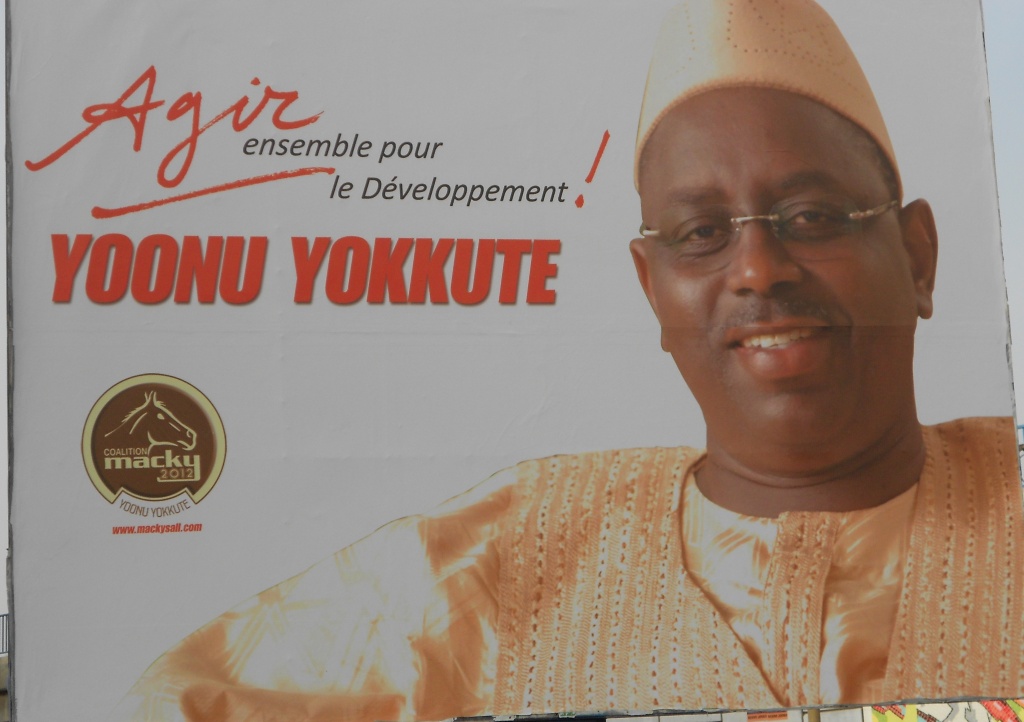 Here, Mackey Sall, like Wade poses in alternating western and traditional dress, often is sequential billboards, seems stuffed into both outfits.  While American candidates clothes need to signal both power and the common touch, here this plays as both western and African, perhaps a larger span to bridge.  In both cases, however, his overripe physical quality suggests his widely known corruption, at least according to Pape.

But the headlines on the newspapers clipped to strings along the VDN highway have settled into normal hysteria, one that suggests an acceptance of Wade’s third term, a relief over the end of violence and a fatalism over the ability of anything else to disrupt the power of an incumbent government that many believe will steal any vote that eventually occurs.