Looking at my last post and then noting the silence, I understand how people might be concerned.  No, I didn't change my mind and run out to watch the riot.  The internet was cut off and that seemed to somehow mess up the wifi system in our house, so I've had no access for a couple of days.  Really, there have been two nights of protests in Dakar, and a few more outside the city.  Most of the city remains calm.  It's a natural part of media reality- while the conflict is important and does attract attention, it's not the larger "reality."  Here are a couple of entries I wrote the past two days- 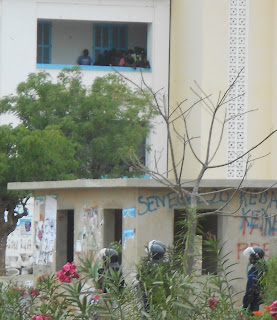 Last night’s death deaths of a two students at the university seems to have focused the conflict on the university today.  As I write, the internet has been shut down again, leaving me uncertain about the larger picture and dependent solely on my own travels.  While I’m comfortable with the post-modern limitations on knowing truth in the classroom, trying to find it in Dakar these days feels more practical and frustrating. 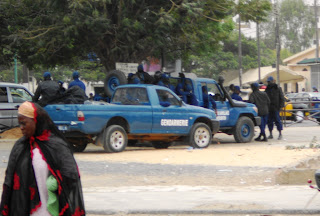 This morning, I decided to run through the university to see the remains of the conflict I followed last night on twitter.  Crushed rocks in the street showed where a couple of particular conflicts happened, and more burned tires, boulders and palm tree trunks showed where blockades had been set up.

This afternoon, when my thesis writing class was canceled yet again, I went back and found police and students engaged in a daytime conflict.  On balconies of the top two floors of a university building, students taunted and chanted at gendarmes positioned behind buildings near the street.  When the students drew fire- tear gas and rubber bullets, I think- they cheered.  Police seemed all too willing to engage them without any apparent purpose.  Nearby, traffic jams were worse than ever on this grey, hazy day, leaving the air worse than ever.   Some people came to watch, others filled the ‘cars rapids’ just trying to get home for dinner.   I walked back to the nearby café and had a beer.

Conversations with people today suggested a greater sense of hope that the president will pull out of the election.  Yesterday’s large protest and last night’s death seemed to shift the momentum again.  Sunday, the opposition candidates are scheduled to meet and discuss pulling out of the election in an attempt to nullify it.  And the papers on one side suggest the opposition has no leadership and on the other side portray President Wade sitting on six bodies of protesters killed in the past two days.   On the TV news, government ministers call for respect of the law and the democratic process.  Spokesmen for two religious leaders ask for peace during the festival of Mohammed’s birthday which will be celebrated this weekend.  Meanwhile, across the city, life goes on more or less normally.