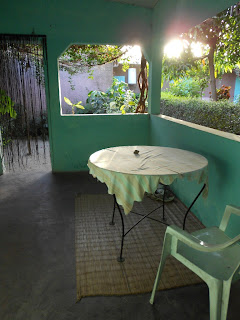 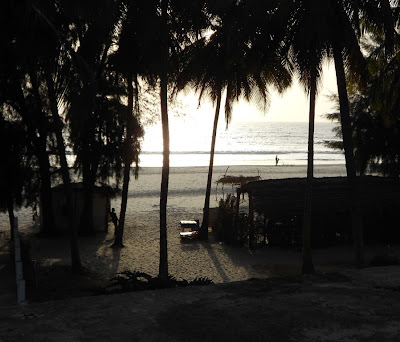 (This was written a couple days ago.  Less wifi here than I thought).

Et quelle plage!  Both drumming and the surf work out different beats from the beach, and once again I’m find myself asking- why do I live in the Midwest?  From the boat coming in this morning, we watched pelicans roosting along the shoreline and river porpoises playing in the wake. 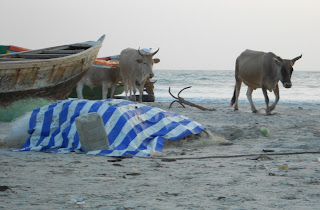 Although the misty haze washes out the pictures, this beach goes for miles in each direction.  Just a kilometer or two south, Equatorial Guinea starts, and perhaps 20 kilometers north is The Gambia.  The mostly empty white sand beach feels endless and the longhorn cows sleeping on it make it feel African, somehow.  Fishermen in the village north of here bring in their catch all day long, and people come out to buy conch, flounder, some whiskered sort of catfish, and a few others I couldn’t name.

On the advice of a couple French people I met in the taxi, I’ve landed well at beachfront place with a large common area for morning coffee and after dinner tea and conversation.  My room has a porch that opens onto the center courtyard.  The rooms facing the ocean were taken, but at $25 a night, I’m pretty happy.  There is a Club Med (Club Merde, the French called it) with a large manicured grounds and guards on the beach.  In town tonight, the guys who follow and befriend you here seemed more insistent and harder to shake.  Somehow, I attribute that to having a Club Med in the area, fairly or not.

Tonight I talked politics, protests and media distortion with the manager and his two friends.  They feel that the violence in this area, the Casemance, get exaggerated on the news, just as I’ve felt the protests in Dakar get exaggerated in the camera lens.  Yet watching the news on the boat coming down, even I felt the street violence Friday afternoon and evening looked worse.  In one clip, three policemen were in the back of a pickup truck watching a crowd which threw rocks and drove the policemen to take cover behind the truck.  They played it multiple times during the broadcast, and there were grins and laughter at the image each time it came on.  Clearly, there’s no love lost between the police and the people here.

I left early to catch the boat yesterday, fearing that the protests would back up traffic near the port which is a half kilometer to the Place D’Independence where the tear gas and plastic bullets were flying again.  Yet the conflict remained pretty localized, and there was no problem moving about town.  Now getting out of Dakar feels like a good call, and I’m glad to have a few days here before heading back to Dakar and then back home.