Class yesterday felt a bit tedious.  Struggling through the language and sentences of The Scarlet Letter, we were all feeling a bit tired by 4:30, so I asked about the headline in the papers that said this would be a tense week in Dakar.  They laughed about it, knowing well the papers here prefer the inflammatory to the factual in most cases.  But that launched us back into a political discussion, specifically one about the relationship between citizenship, activism, and the Senegalese mind set.  This was all colored by a deep cynicism/fatalism which I questioned pretty aggressively.  Is the ubiquitous "Insh'Allah" (If God wills it) more language or psychology?  Does it create passivity and fatalism?  The response was mixed and discussion was difficult.  It became impossible after one student admitted he was a fan of President Wade.  The class exploded.  Senegalese conflict tends to be loud and aggressive- but rarely escalates beyond that.  I've seen this among kids in the streets as well as adults.  Yesterday it came to my classroom.  I tried to descalate, to encourage people to listen.  They were trying to convince me, talking to me not each other, and I said, "You need to work this out among yourselves.  I'm leaving in two weeks.  This is your country."  That seemed to hit them, although the rage over a "Wadiste" in our own ranks was still hard to accept. 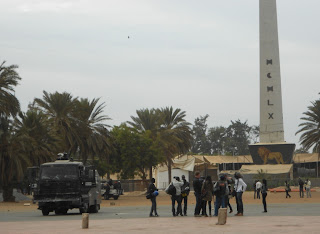 While I've sensed a general settling into the campaign here with newspaper coverage of the candidates dominating the front pages of the papers, the opposition groups M23 and Y En a Marre have decided to use an Occupy Wall Street / Tahrir Square technique, no doubt invoking those moments intentionally but also seeking to create an ongoing point of conflict and dialogue. Their language suggests they realize the violence of the earlier protests was a problem, and they emphasize peaceful protest more than ever now.   Tonight, they plan to occupy the Place de L'Obelisque, 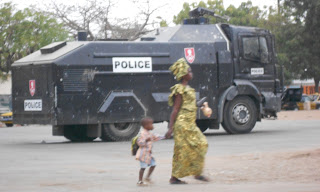 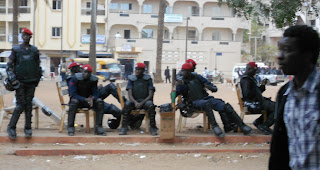 but this is what awaits them.   At this point, the only people occupying the place are the reporters waiting for some action to fill their papers, web and tv screens.  The stroll around with impunity while the Senegalese walk around the edges of the square watching.  The M23 and Y En A Marre members were nowhere in sight when I left.  This armored police water truck is probably the one that ran over the student a couple weeks ago.  I've also seen it in the Place D'Independence downtown when protests were threatened there.  It seems to be the police showpiece.  Perhaps a hundred gendarmes ringed the square, some in trucks, some standing, and some, like this group, taking advantage of bus stop benches to wait for whatever happens tonight.  A Reuters photographer I spoke with said it's too cold tonight, nobody will come out, and that the action will happen tomorrow when the opposition has planned a march to the Place D'Independence, close to the president's palace.
Posted by John Wensman at 11:27 AM