Wednesday, I worked with the girls from the Lycee JFK on their video projects.  We met at the school which remains a hang out for kids despite the strike.  Mamadou works with these students in part because of the relationship with the Philadelphia school which isn’t, of course, on strike and still might move forward with an exchange, although the political situation may change that, too.
The students arrived on time, dressed in their uniforms mostly, and worked on their scripts diligently, apart from some requisite texting and facebooking.  They know the exchange might not move forward, but never seemed to question the effort.    They wrote sweet self-introductions that described families, hobbies, and mostly favorite television shows and singers.  They have a French habit of putting ‘etcetera’ at the end of each list which I tried unsuccessfully to extinguish.  I was more successful getting them to make their verbs all parallel, either infinitive or present progressive.
As we worked, I realized I hadn’t reacted this time to the state of the classrooms, the graffiti, the dust, the broken doors, the fact that not much had been done to these buildings since Kennedy administration money built them in 1964. And it struck me that same sort of natural, perhaps necessary, creeping acceptance allows these students to accept the fact that they might well lose and have to repeat a year, (an ‘annee blanche’, a term we don’t even have).  University students understand the costs better and wear t-shirts protesting the loss of their education.  But somehow, the government and the people largely accept a dysfunctional education system that goes on strike regularly, that warehouses university students for years with too many students chasing too few diplomas with too few resources, and most tragically, that doesn’t create the educated population needed to function in the world. 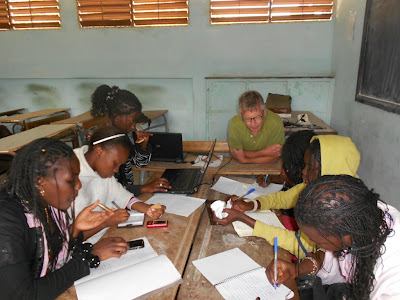 In St. Louis, a small, noisy two room Islamic school next door to my hotel taught elementary students through oral repetition.  Seated in rows on the floor, they chanted together for classes.  During lunch, they lined their wooden tablets w/ black charcoal script neatly up against the wall and ate together from large metal bowls.  I know that few US students would line their tablets/ipads up so carefully.  I don't know how much these memorized lessons and respect for authority will ultimately serve these students.
Posted by John Wensman at 1:14 AM