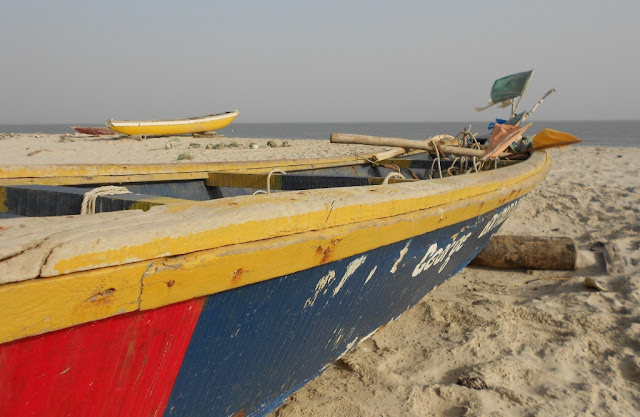 Back from the beach, I enclose one more picture of boats in Guinea Bissau, mostly for myself.  And the goulash was part of the nice last night dinner at a sweet French restaurant in Cap Skirring that served locally made cheese- a rarity here.   As I write a pro-Wade event is going on down the road- at his party headquarters.  It's all politics back here in Dakar.  The schools are all shut down now, even the private ones.  Mme Diop has stocked up on food for the weekend. 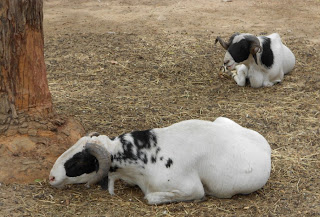 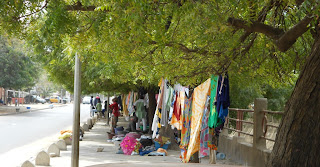 The three local college programs have put their students on short leashes, if not quite as short as the tethers on these city sheep. The CIEE program would be on spring break, but they've forbidden students to travel in the country. They're not happy.  So these photos, well they're rather random returning to the city photos I've liked but not found occasion to use. This laundry gets hung on a main road on Sundays right next to the open sewer ditch which is below the railing.  The 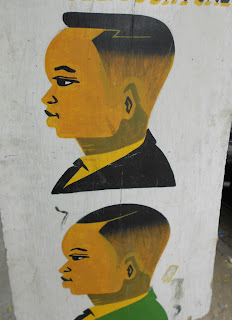 For some reason I don't understand, coiffures often use pictures like this to advertise their shops.  I love both the retro look of the images and the cuts.  Given that backwards hats or rasta dreads are what seem most popular, these feel even more dated.  The 'check drop' or 'sagging' as we might call it, wearing your jeans way low on your backside, is also big, and a newspaper even had an article mostly focused on the horror of girls sagging, too.

But all conversation now is about the elections.  In a facebook poll, Wade comes in 3rd at 15%.  The tailor I visited today to pick up some sewing launched into tirade against the president.  There are many rumors flying around about last minute political "deals," about the fraud already being found in voting cards, but mostly about what will happen on Monday if Wade 'wins.'  For most people I speak with in Dakar, no Wade victory is possible fairly or acceptable politically.  I did see more evidence of pro-Wade graffiti and posters and t-shirts when I was in the south this week.  One strange rasta local launched into a harangue about how Wade was a 'real man' and that's what the people wanted.  A French woman who lives here suggested another theory is that Wade and his crew have 'assez manger' (stolen enough money to satisfy themselves) and that a 3rd term might result in less corruption than new politicians who haven't begun to 'manger.'  It's harder to think of a more cynical political calculus, but that reflects some of the desperation here.   With many schools and shops already closed before the Sunday election, the city feels very quiet, as if holding its breath.  This burned out Citroen remains in a local street from the first protests two weeks ago. Most people think if President Wade somehow manages to declare victory after Sunday's election, there will be many more burned things around Dakar starting Monday. 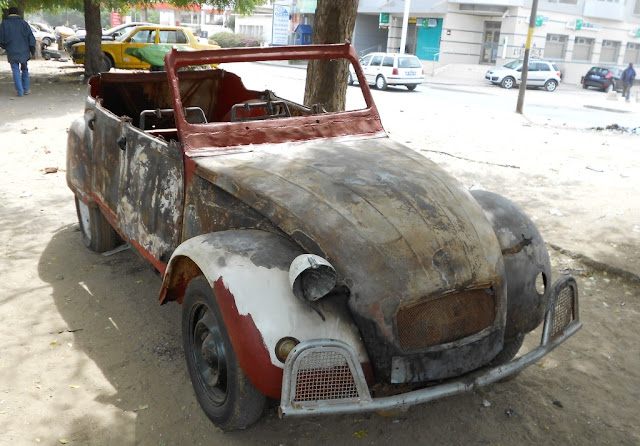