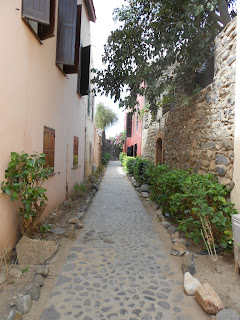 I'm going for stream of conscious here on Friday afternoon.  Consider yourself warned.  Yesterday I went to the Ile de Goree, an island 20 minutes out from Dakar that Clinton and Bush (43) and many others have visited to acknowledge the history of the slave trade.  It's a gorgeous place with colonial architecture in much better shape than St.Louis.  It has sweet streets like this one, good food (although still no good coffee) in restaurants like the red one here, and most significantly a restored slave transfer station which was the last stop on the continent for slaves being shipped to North and South America during the slave trade.  It's a simple and sad building with small ground level holding rooms built to await ships.  As a major tourist site, it's also become a sort of art colony with both crummy trinkets and cliched images and a curiously vibrant found object collage/art brut community. 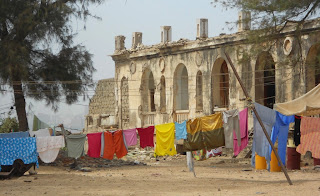 This gorgeous relic beyond repair was the hospital, but the laundry, ocean, arched windows were just a beautiful shot.  Randomly, the George Soros Foundation has a nice place on the island and the building behind the laundry was the hospital at one time.  There was also a gorgeous stone building w/ a sweet balcony just behind the red restaurant.  As I stared at it, a guy walked by and said, "It's for sale."  I guess he might have thought I was George. 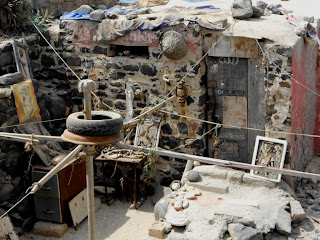 And this, well, I'm not quite sure.  It's a dwelling, has a rather found/art brut/collagey quality to it and had a sign on the wall to the left that says, "Interdit de faire le con" which I'd translate as 'no stupid shit' but I'd welcome a comment from anyone with a better translation.

Last night I went to a movie about the Talibe- orphaned or abandoned children brought into Koranic schools and too often abused and used as profit centers.  Some are well cared for, of course, but others are badly mistreated.  These five were in a larger group outside the cafe after I walked back 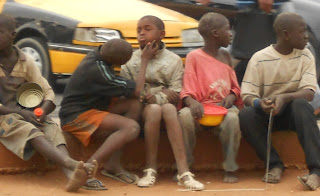 from the university.  When I took this picture from what I thought was a safe distance, the flash went off and they saw it.  Soon they were all standing in front of me silently gesturing and waiting.  The best strategy here is always to ignore approaches.  Any response tends to be perceived as encouragement.  Eventually, someone from a nearby table told them to get lost and they did.  Here, it's obviously hard to know where to give, because you could be doing so all day long.

And in the random discovery vein,  I found that the Goethe Center, a local German institute has a fabulous 5th floor cafe/restaurant overlooking the city just a few blocks from here- and their coffee is excellent!  Who knew I'd rediscover my German roots in Dakar!  I met w/ Mamadou there this afternoon to plan our Design Thinking workshop.  We're hoping to get hired by IMES, a local private K-14 school to do a 12 hour workshop with their oldest students.  It's a good proposal, and I hope we get the work.  As the university students still seem more interested in protesting than editing (not that I blame them) I don't know when I'll be doing the work with Pape's students.

And in the requisite political update, the M23 movement organized a Friday prayer in the city near the President's palace.  The purpose was peaceful, prayerful protest.  While I don't know the size of the turn out. there were no police clashes.  The movement needed to show it could rally w/o violence, too, and was successful.  Tomorrow is the prophet's birthday, so a quiet weekend is expected.  Happy Birthday, Mohammed!