As you can tell by this (too distant) image of the wedding happening around the corner, taking pictures still feels very difficult.  It feels like they kill the experience by casting it in amber (bits?) and here, people are quite sensitive to toubabs (white tourists) with cameras.  I tried to get a shot of a Curves sign in the center city today, and the two women at their fruit stall thought I was taking a picture of them and scolded me.  They couldn't have understood my confusion at the presence of a Curves franchise in Dakar.  Somethings are inexplicable.

Nonetheless, I managed a photo of this wedding in the park nearby.  Many women dressed in bright grand boubous with live music under the tent.  My landlady, Mme Diop, is there now, as it's the neighborhood event of the weekend.  While it looks exotic to my eyes, I tried to imagine how a Melrose wedding would look in reverse, w/ a reception at the VFW hall and a polka band thumping a bit more slowly than this one.  The dancing would be calmer, the clothes would be less bright, as well, but the beer would be flowing more freely.  The kids running excitedly in groups around the edge of the event would be just about the same. 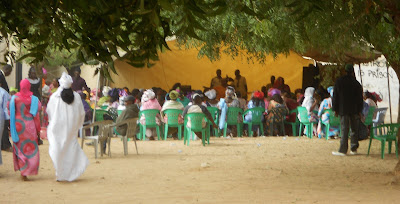