Dakar is oddly quiet today.  The newspapers pinned on a cord next to the highway caused a crowd to gather with their dire headlines.  CIEE advised its college students who arrived this week to get to know their host families and stay inside.  Everyone advised me to stay away from the protests this afternoon. The quiet roads suggest that many people are staying home and waiting.  Many people speak of a fear of violence.  Senegal seems at a new peak in its constitutional crisis.  The "5 Sages' as they're known ironically in the graffiti, five supreme court judges (who just happened to get huge raises last month) are expected to issue their decision today on President Wade's desire to run for an unconstitutional 3rd term.  He claims the constitution was reformed halfway into his first term, so it's really only a 2nd term on this version of the constitution. 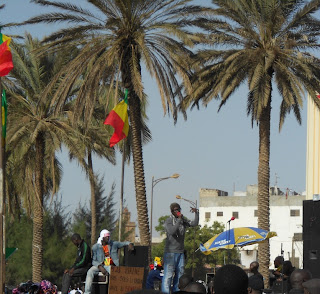 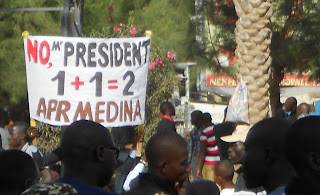 Every person I've spoken with emphatically disagrees, and this banner tries a mathematical approach to tell him.   Although the judges have set no time to issue the decision, now people think they're going to wait until midnight to do so.

A coalition of opposition groups Y En a Marre (Enough Already) and M23 (A student group named for the June 23rd date the National Assembly denied the president's last attempt to change the constitution) planned a protest for today at the Place de l'Obelisk which was forbidden by the president.  They're still there now, with riot police massed just down the road.

Y En a Marre is known as an artists group and has made good use of Youtube videos and rap music to get their message out.  They seem to share some similarities with the Occupy Wall Street movement.

This afternoon, a few thousand people of all ages gathered, with many more waiting and watching in the side roads around the park.  Despite the headlines and the police, loud music and and the large crowd created a party atmosphere.  Senegal 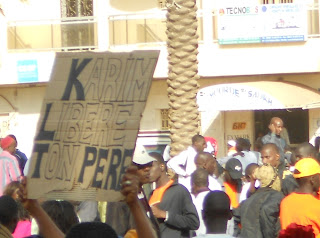 enjoys free speech in addition to their free press, and the crowd  was exercising it today.

Groups supporting different presidential candidates wore t-shirts and posted banners.  The organizing groups wore t-shirts as well, and Y En a Marre people worked the park picking up trash while rap singers worked the crowd into some waving and chanting.  This poster suggests that Karim, the son of the president known bitterly and facetiously as the "Minister of the Earth and the Sky" because he's been given so much authority, should free his father. The shirt below takes the direct approach. 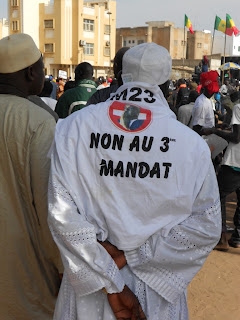