When I arrived at the Lycee John F. Kennedy (a public girls high school) this morning at 10:00, A dozen policemen half sitting in their pickup truck and half standing in the street watched as a five or six tires burned in front of the school.  Students were pressed up against the iron fence watching the scene with amusement.  Another crowd of passersby gathered in the park behind the police watching. 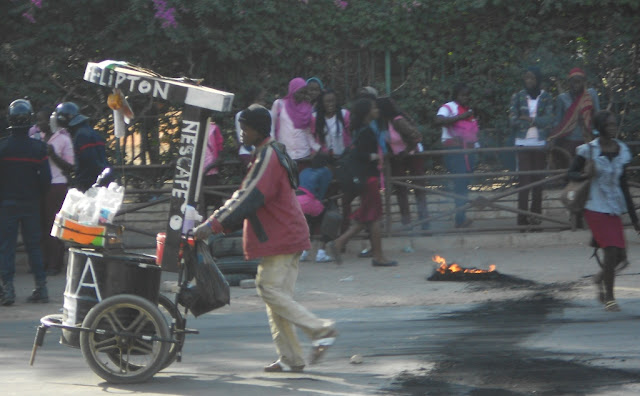 Yet the whole scene was more comic than threatening.  While the police seemed stressed, this local barista saw a good marketing opportunity and moved around the scene moving product.

This student protest, arranged by graffiti on the wall apparently, lacked organized chanting, posters or speeches. A crowd showed up, a few tires were burned in the street, the police arrived to make it all official (and a few spent the day at the intersection near campus for the rest of the day) and then everyone went about their business of not going to class.

Afterwards, Mamadou and I met with a group of six students and we worked on videos to send to a school in Philadelphia before the schools exchange students in March.  For these students, the potential of an 'annee blanche' (a wasted year they'll have to repeat) is more disturbing than a protest.  They seemed glad to spend the day working on their English scripts for the projects and finding new ways to incorporate the vocabulary term of the day- "talkin' trash."