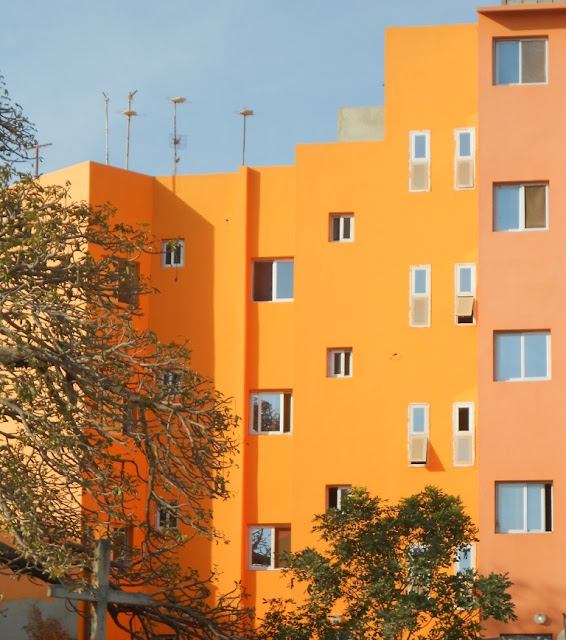 Nice, eh?  There's what my favorite nun, Sister Wendy, would call a 'wonky' quality to the lines, as if it's more Cezanne painting than photograph.  I just liked the building and the shot, and so I include it.

As I write, the "Y En a Marre-ists" as they're called here are gathered in the park by the obelisk again.  Mme. Diop has the radio on at full volume listening to the speeches live.  She's rather like my mom (Hi, Mom!) full of rage for the imbecilities of politicians.  I'm surprised she isn't down there herself, really, although she doesn't leave the house much.  Both my classes today were cancelled, the high school students out of anxiety about the demonstration and the university students because they had their own protest today for a student was killed on this date several years ago by the police.  The death toll from yesterday's demonstration up north has risen to four, and Obama made the front page of the papers here calling for President Wade to retire and let the next generation take over.  Obama is extremely popular here.  I've seen bumper stickers, pictures on backpacks, and t-shirts.  It would have made a good present to bring some. 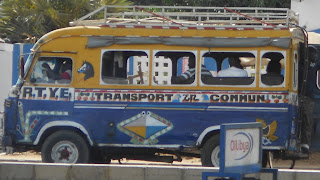 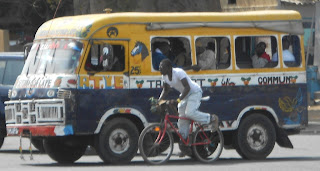 Here are the ancient, colorful and smoky buses that move everywhere in Dakar and beyond.  They're painted rather like the boats in St. Louis with bold colors, images of a marabout (Islamic holy men from a Moroccan tradition), and names like "City Boy" or "In Sh'Allah."  For twenty cents you can ride any distance.  They tend to be pretty full, generally, often having two or three guys hanging on the back riding on the back bumper.  You can see one in the top photo if you look closely.  If you're riding the back, you bang on the side loudly to tell the driver you'd like get off.  He'll often just slow down instead of stopping, making for some dramatic mid-traffic dismounts.
Posted by John Wensman at 9:41 AM