It's all politics here, too

And it's hard not to start with the headline in today's paper.  President Wade apparently offered the Senegalese national soccer team 20 million CFA ($60,000) each plus a house if they win the Africa Cup which is underway.  Like the wrong footed price increases on rice and cooking gas this week, Wade seems oblivious to the plight of the people in his country, and their rage just seems to grow.  Papi, the college student whose house I live in said, "That's our money!"  I don't imagine Wade will be releasing his tax returns, either.  Today's bus/taxi strike left the roads full of walkers, although there were some large buses and some illegal taxis running, too.  "Les Clandos," private cars used as clandestine taxis stepped up today, too.

Unfortunately, there doesn't appear to be an opposition candidate with any particular momentum.  Of the 12 candidates running, three are former prime ministers who were pushed out.  Wade has had five prime ministers in ten years.  Only some of these candidates seem to be using posters, but all of them put their images on the posters.  Mustapha here, goes for substance with lots of text about a January conference and his party affiliation.  I'm less sure about the meaning of the white cloth.  I'm guessing in Senegal it's not surrender 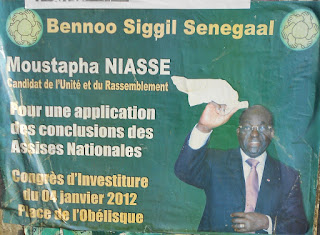 Now Tanor seems to burst with enthusiasm and good will in this image.  He's also got the simplicity thing down and even the colors work for him.  This poster is green but others are blue.  He's got my vote, based on aesthetics. 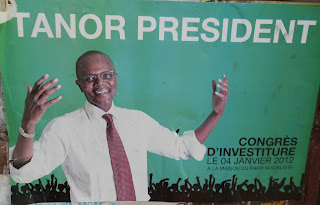 Now Gadio, however, is another story.  Is it the orange color?  the creepy smile?  That finger pointing straight into your chest while he talks to you, no, it's the gold bracelet, I think.  Why do I think his slogan "Liberate the Energy" might really mean "Liberate the Treasury"?    The only word I've heard in support of singer Youssou N'Dour is that he doesn't need any money and therefore shouldn't be corrupt.  That, at least, would be a nice change. 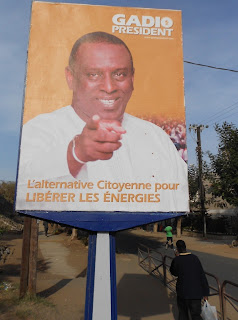