This weekend I went up to the 350 year old town of St. Louis, former French capital of all the west African colonies.  Getting out of Dakar was eye opening.  I actually felt like I hadn't been in Africa until yesterday, and then most of it was still from a car window, albeit a 25 year old Peugeot 505 wagon with extra seats, bad alignment, and 8 passengers with bags.

On the way into the bus/Peugeot station, I saw evidence of  'unrest' (to use that euphemism) in plenty of places and gendarmes everywhere.  Remains of burned tires and rubble still marked the roads.  A few cars and shops had been burned out, too.  At least one was a Chinese shop.  There's resentment against the growing Chinese influence here.  One of Pape's students said that all the engineering projects go to Chinese firms now because their prices are so low, but he said the work is substandard.  Another told me you're better off buying used technology now over new Chinese goods.  On my trip back today, however, the police presence was mostly gone, and the unrest shifted to the radio and the back seat of the car ride home.  The beating death of a policeman by protesters has also affected the tone of the debate.  It's quiet now while everyone plans next steps.

My quiet weekend involved wandering around St. Louis.  The city was chosen for a nearly perfect shipping location.  Protected by a barrier island, it sits in the mouth of the St Louis river where it empties into the Atlantic. It remains a traditional fishing village with hundreds of boats that they build and paint here. 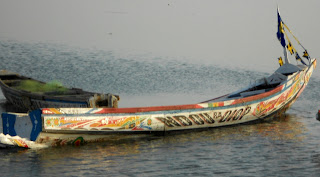 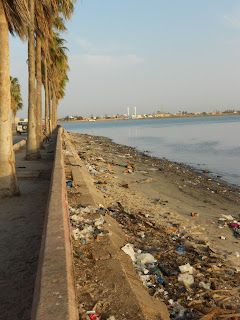 Some of the ancient colonial French grandeur remains on its carefully gridded streets.  Some civil buildings, a couple hotels, and some warehouses in addition to many houses.  Yet I have to admit I struggled to admire the architecture amidst the trash and decay.  This morning I watched as a young boy took out the trash.  He walked the bag to the edge of the river, turned it over and dumped it in.  He shook it carefully afterwards to make sure it was empty.  It was.  This beach at the southern edge of the island was far from the worst of it.  Goats work the trash, too, but it's hard to accept it as mitigation.  Here as in other places murals offer environmental encouragement.  This one says, "We fight against filth," but even this image suggests the battle is being lost.