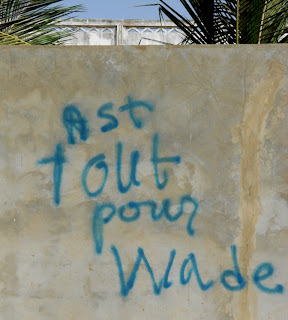 In this election season, Dakar is covered in graffiti and posters. This one is from a fringe group that supports the president Abdoulaye Wade in his attempt to run for an unconstitutional third term.  Apart from graffiti like this, I have yet to hear anyone say a civil word about the current president.   Mme. Diop, my 73 year old landlord, gets visibly flustered with every political conversation.  Abou, the corner nescafe barista predicts violence in the street.   An Occupy Wall Street style group called Y En A Marre (We're sick of it) held its one year anniversary yesterday in a downtown park with street theater exhibits about the problems facing the people of Senegal.

From the US, we're used to distant rumblings about difficult elections.  Certainly I struggle to keep track of all the current political trouble spots. Except for the 2000 presidential election in Florida (oops!), we expect our election process to function, if not always well.  Senegal's 35 year old democracy is about to be tested and people lack our confidence.  Although I didn't see this in the NYT or the Washington Post, Hilary Clinton's warning to the president has been big news here.  People appreciate any international attention that adds to the pressure on president Wade.  In a conversation today, the head of the International School of Dakar felt pretty sure that the election would go smoothly, but even he mentioned the 2011 post election civil war in Ivory Coast that led many people to flee here from the violence.  The fact the political parties here have no ethnic affiliation reduces the risks of violence somewhat.

If you have heard of this election, you probably know that musician Youssou N'Dour is running for president.  Remarkably, none of the people I've talked to have mentioned his name.  They don't seem to share our fascination for celebrities crossing into politics.

As I've noted, teachers have been on strike, high school teachers since November and the university professors haven't entered a classroom since fall.  Each group is using the election to press its demands at election time.  Tomorrow, truck drivers, fishermen and bread bakers will start their own strikes.  For three days there will be no buses, fish, or bread.  And here, those are big things.  Two weeks ago, the bus and taxi drivers went on strike, and many private car owners joined in.  The roads were largely empty for two days, I'm told, and nobody went anywhere.  As in the French system, strikes are more common here serving as much as a form of political dialogue as economic leverage.  And that conversation is about to get much louder.