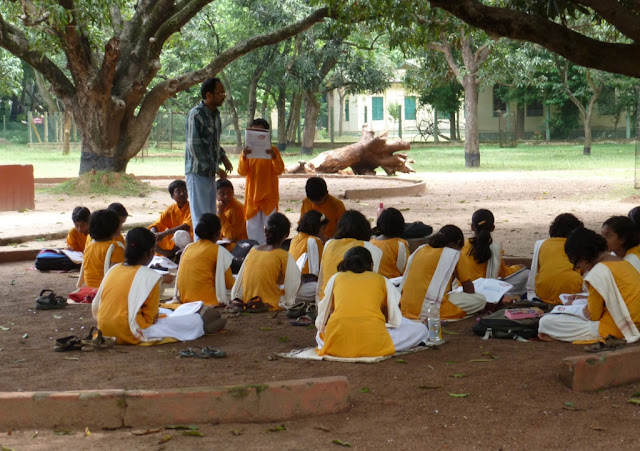 Despite the heat, these saffron clad students gathered in small groups under trees working on drawings, reading English texts, studying Sanskrit look idyllic. The place invites that sort of view.   As envisioned by Indian poet and renaissance man Rabindranath Tagore, almost all classes meet outdoors as they have for over 100 years. One teacher said, “Students get so distracted when they’re stuck in a room all day.”  And we all tried to imagine our students here on the ground every day. The kids in the English class we observed read their passages, laughed at some inside joke, and seemed unaffected by the heat or our group of 13 observers.

Patha Bhavana educates 1100 students in grades K-12 with several hundred more in the associated university. The campus spreads across several acres with a second campus six kilometers down the road.  The colorful, colonial buildings are set in a simple grid pattern around parks, a large, green playing field, and a national historic site. Against the infernal honking and normal chaos of even the small village nearby, the school seems an oasis.

Unlike most private school classes here that have 40 or more students in small, stuffy rooms, these groups of less than 20 felt intimate. The fact that half of the students live on campus in dormitories guarantees it.  I struggled to imagine a dormitory of 2nd gradesr, but was assured there was one. This is a slightly older group going to lunch.  They all had short hair which seemed a necessary concession to group living. 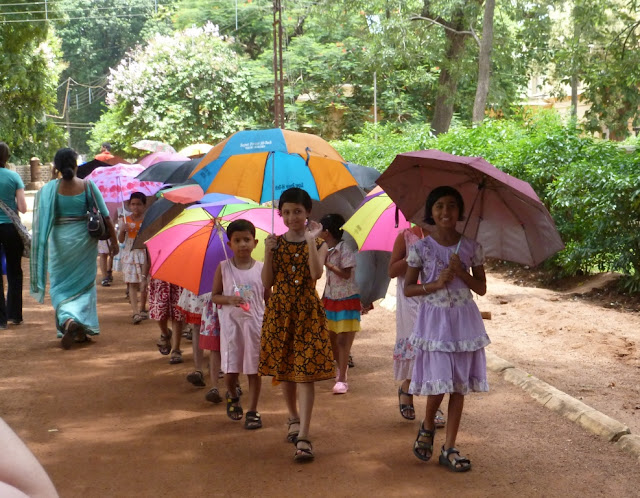 Our guides were English BA students one of whom had been there since 2nd grade. They were passionate advocates for the humanistic approach.  Most Indian parents want their children to be doctors or engineers.  The man on the train home told me how his son had switched from engineering to art, but he didn't seem too disappointed.  Here, students can succeed in areas outside math and science and be recognized.  Yet apparently students here prefer cliffs notes to reading just like students anywhere, and in the recent English exam for the BA students, 20 of 40 failed.  Once admitted to the university, fees are very low and retesting later is a given.  The motivation to work and graduate from the bucolic world can be a bit low.

Santinetiken was founded in 1901, Dewey’s Chicago Lab school in 1896, Montessori’s Casa dei Bambini in 1907, and Steiner’s Waldorf schools in 1919.  Like Waldorf in particular, Patha Bhavana struggles to distinguish founding elements from important elements.  Are three years of Sanskrit instruction really an essential part of the model?  Should technology be included?  And my own personal question- is it really necessary to learn the entire 2000 song canon of Rabindranath Tagore's canon?  Like some of these progressive era notions, the school is seen as an isolated exception rather than a general model for the larger education system.  At the current moment, High Tech High, Expeditionary Learning, Project Based Learning, and a host of other networks and organizations work to push similar open education ideas into the mainstream in the US.  This historical educational island in India seems a good spot to view the larger educational tides.