Last night I walked around a new neighborhood and felt that travelers euphoria that comes from constant amazement.  Wonder is a powerful force, and I get the sense India has always been a primary source. On my walk, I came across the motorcycle repair part of town.  First there were the parts stores.  Then I came across an outdoor custom seat repair shop. You choose the vinyl seat pattern and they sew it onto your pad while you wait.  Finally, and in the dark, I came across the mechanics who worked in the street without benefit of light or lights.  None had even the lean to shed of this shop from the village I visited last weekend. 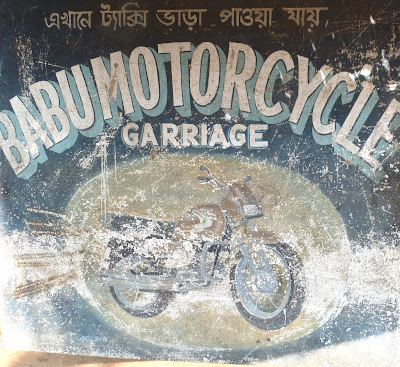 In public  transport, India also exceeds expectation.  Dozens of people ride on the tops of buses in the countryside, while they merely stuff them full in the city.  On the trains, especially in the air conditioned cars, its the vendors who create wonder.  The snackwala whose custom metal carrying container had a large central storage area for puffed rice which he then seasoned from a set of about ten different seasonings.  He mixed it all in another container and served it in a rolled newspaper cone. 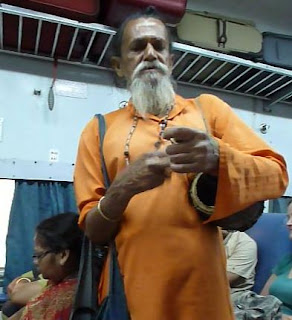 Although I didn't get a picture of him in action (it really required video) this was the musician who mostly made me wonder when he was going to stop.   He's playing a two string number that starts with an open drum held under his arm and ends with a handle in his hand.  The strings are held tight along his forearm between drum and hand and played with a large wooden pick. 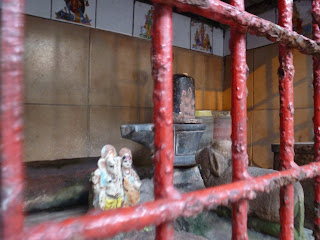 This is one of many Hindu street shrines.  They range from room size places of workshop to small objects perched on decorated platforms.  This one was secured behind a metal grid.  Some sit in the open.  In the evening you generally see someone making an offering at one.
Chawalas  (cha is tea here) or coffeewalas are among the most common vendors, of course.  Like everything else on the street, they cook with open charcoal fires burned down to coals.  Often these sit on the bustling sidewalks.  While there was a letter to the editor about the hazards of this, like most hazards here, it's long established practice. Servings are very small, and most are offered in ceramic cups.  What's remarkable is that these hand made cups are single serving.  I'm still somewhat shocked that hand made, nonstackable cups are preferred to small plastic ones.  When you're done you just drop them on the ground.  Being very low fire terra cotta (perhaps just sun fired) they are ground underfoot and return to dust.  Here's a picture of evening pile in front of the cha stand in Santinitiken. 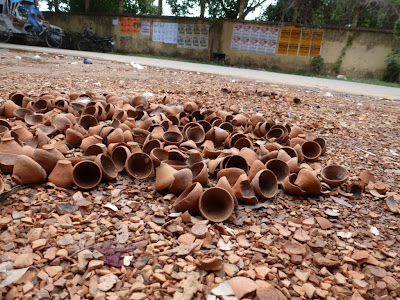